Are you trying to conceive or are in the middle of IVF treatment?

This might sound obvious, but at this time of year, I cannot overemphasise how important it is to not only keep warm, but to also keep your circulation moving properly.

Case in point; a patient of mine was in clinic the other day as she is preparing for her IVF cycle and I've been giving her specialised acupuncture treatments to improve her lining thickness, which historically has lead to her cycles being cancelled. Apart from the lining issue, she hadn't had any embryos make to day 5, so that was her primary concern as there's no use having a thick lining, if you've no embryos to transfer!

Thankfully, on her most recent treatment cycle, after following the diet and acupuncture protocol I had recommended she managed to get 2 good quality embryos. So it was now just a matter of ensuring the lining was going to be good enough for implantation to take place and ensure that she had a good chance of a viable pregnancy.

She had been in with me only 2 weeks earlier, presenting with the following symptoms;

- finding it hard to get going during the day, low energy

Apart from acupuncture treatment on the day, which she told me afterwards warmed her up for the next 24 hours and improved her sinus symptoms, I also gave her very specific instructions to follow at home;

- apply self-abdominal massage, morning and evening to improve circulation to the digestive system, not to mention the reproductive organs.

- Every day she had to include warming spices in her meals- E.g. ginger, garlic, cinnamon, cumin, paprika, turmeric etc.. Not spicy, but warming, like you would have in a mild curry.

- Dairy and in particular, ice-cream were completely forbidden.

- I advised her to make chia seed pudding to get the bowels moving.

- On the hour each day she was to stand up and do some star jumps or squats to get her circulation going.

- I also suggested using a body brush before bed or after showering in the morning to keep the blood flow moving well, even in the absence of exercise.

She was in with me again yesterday and I could see a huge improvement in her tongue (pink colour, moist coating but it was no longer thick & white), so I wasn't surprised to hear her report that her other symptoms had all improved;

- She had fun incorporating the exercise challenge into her day, it wasn't a chore as she didn't have to make the effort of going to the gym.

- she didn't feel heavy or sluggish anymore, which was unusual for her, as with past IVF cycles she usually felt poorly at this stage due to the fertility medications.

- the sinuses hadn't been bothering her at all, she only had an occasional post-nasal drip feeling in her throat and the cough she had previously had, was now gone.

Best of all, her lining thickness, which in spite of tons of fertility medications had never surpassed 4.5mm, was now at 5.4mm, and is likely to increase further (fingers crossed) in advance of her frozen transfer next week.

It doesn't matter whether you're trying naturally or via assisted methods, it's important to support the development of those egg follicles, which requires good blood flow to bring the oxygen and nutrients where they are needed most.

The same goes for the endometrial lining. It's not just the thickness, but the quality of the lining that matters.

The point I want to make with all of this, is that it's sometimes very easy to overlook the simple things, which can have a huge bearing on our health.

You are NOT helpless in this process. Take the frustration of trying to conceive and try to turn it into something positive by taking control of all the little things that can be changed and have the potential to significantly influence your odds of conceiving, while also benefiting your overall health. 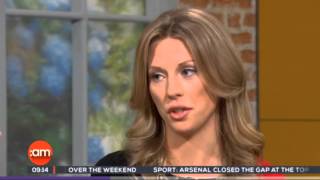